Something that came up recently at a con we were displaying at in the 5th was we had a lot of prop weapons and not a lot of space. Being prop weapons they tend to be more on the delicate side, so if they fall over or get stepped on, they could break!

I found that we were generally leaning them up against the booth table or placing them on a chair when not in service which made a tight space even tighter. When I returned from the con all I had on my mind was for a way to tackle this. 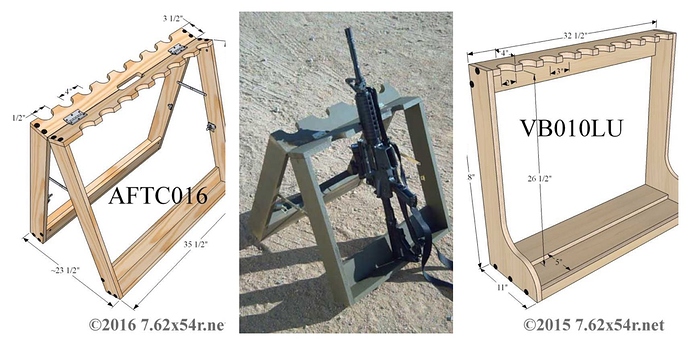 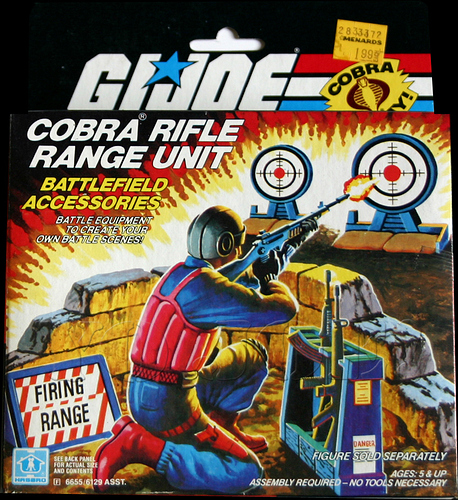 Doing a little looksee online I found some general plans and dimensions to make one but I was also reminded that there were some play sets that had scale versions for reference. 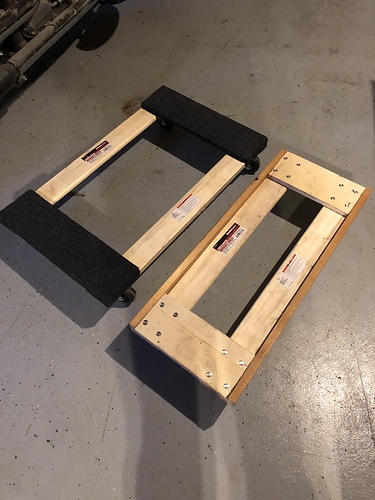 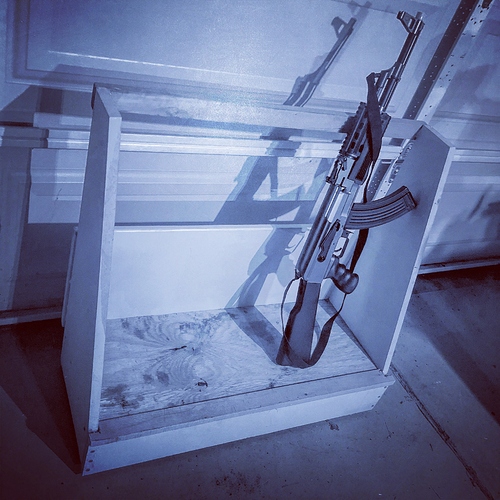 I decided I wanted to take advantage of not having to lift and carry this from a far away parking lot to the show floor. Having just moved into a new home I had purchased a couple of furniture dollies which made life easier on me and turned one into the base for the rack by cutting it down and moving the wheels. 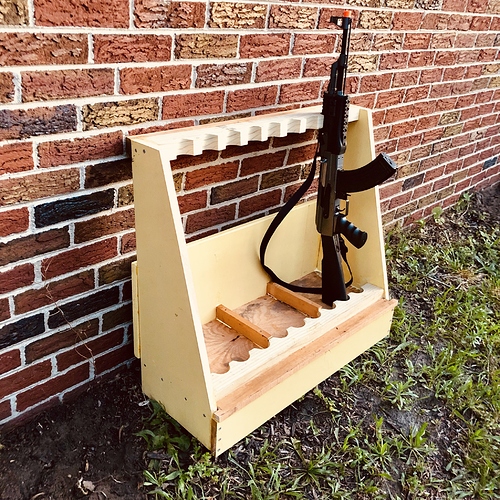 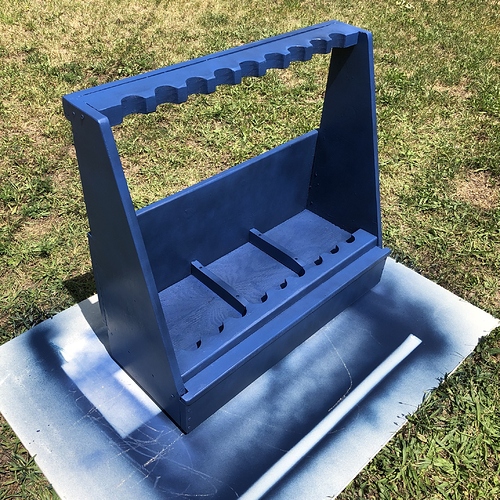 This was all made from scrap lumber that was at the new house already. I lucked out to have some shelving boards and some trim that I cut up and glued and screwed together. I did have to buy a 2” forstner bit to make the groves in a 2x6 that I cut in half to hold the guns in place. 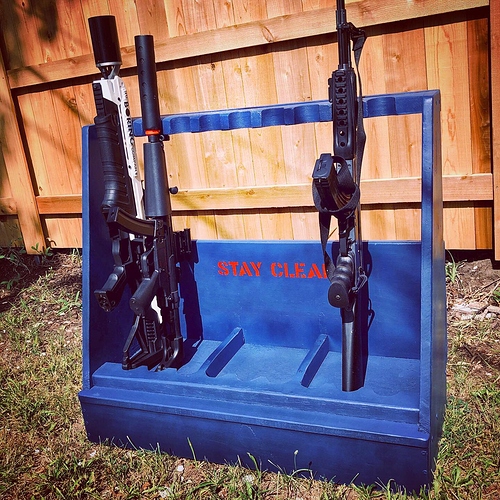 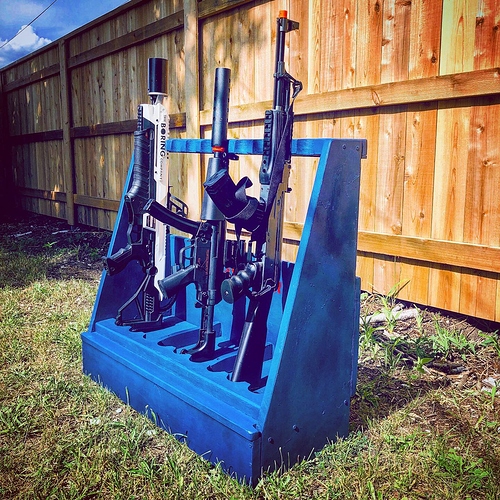 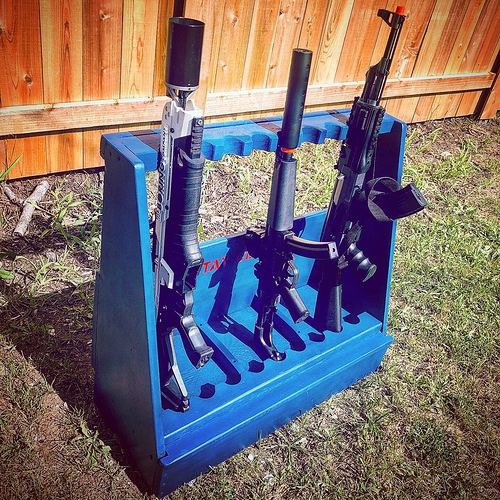 A coat of Cobra blue and a stencil complete the look. This should help out and keep the weapons safe when not in use at the booth for the next Con. If anyone is deeply interested I can give you exact dimensions of what I made. It’s not a replica of the toy but it works well and doesn’t tip over easily.

That’s cool, we setup a gun rack for the props at shows as well, though we also sometimes tie a bungie cord around the center to keep the weapons on the rack. Children do love to run and grab the weapons if we leave them sitting around and they would knock the weapons over on the racks even, so we sometimes secure them down.

You can buy a similar looking wooden rack online like on amazon fairly cheaply too, we use one we bought online for like 30 bucks that’s about similar size. We haven’t decorated it though, its just plain wood.

I was considering doing the bungee strap as well. I haven’t employed this yet at a show but will be dragging it out next month for a trail run. I wouldn’t mind seeing the $30 version you guys use?! A quick shot of paint could easily make it cool

One we got doesn’t seem to be offered anymore. It was not the best quality and you had to assemble it yourself, but it did the trick, you can see it in the background of this booth shot of ours. Was considering maybe a coat of olive drab paint perhaps 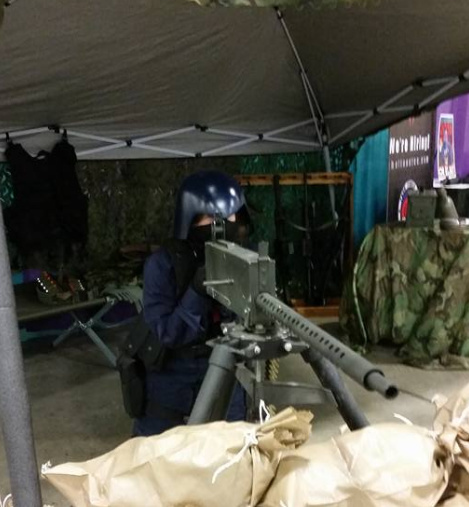 The Tigerhawks have a version of the equipment rack that came with the bivouac playset. We also use an elastic bungee cord around the top of ours. 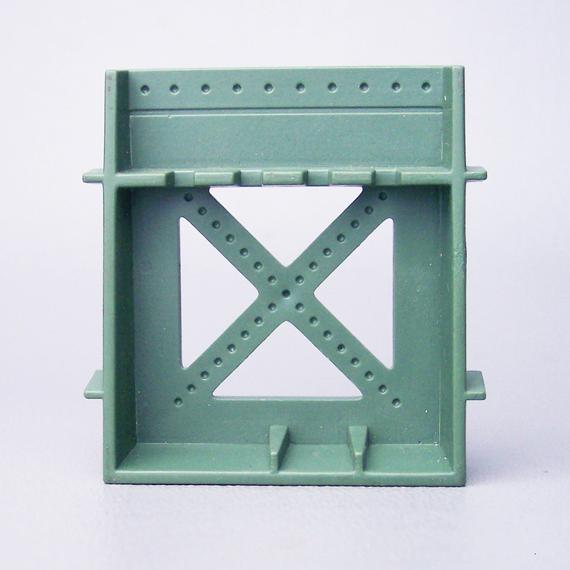 We’ve talked for a couple of years about building a second rifle rack as we always seem to have extra props at our big show. Haven’t done it yet though. Really like the idea of putting the whole thing on wheels!

A bungie strap would be a good option. Ive seen steel rods w locks that go across as well(have a pin on one side and a lock on the other) so the guns cant move

Very nice! More props the better at a con.